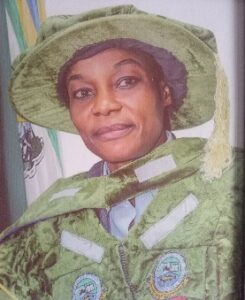 GEORGE, Abiodun Omorinola was born on March 5, 1968, into the Iposu Descendant Family in Epe Division in Lagos State. She had her primary education at Zumratul Islamiyah Primary School, Epe, Lagos State, between 1974 and 1980. She started Secondary School Education in 1980, and completed in 1985 at Ogunmodede College, Epe, Lagos State.

She holds a Bachelor’s Degree (B.A) in English with 2nd Class Upper Division at Lagos State University (LASU), Ojo, in 1994. She has Master’s Degree in Managerial Psychology (MMP) at University of Ibadan in 1996.

She was appointed by the Michael Otedola College of Primary Education as an Administrative Officer II in 1996. Having acquired adequate administrative and professional skills from the various offices she served in the College, she rose through the ranks to the position of Deputy Registrar in charge of Council Affairs.

She is a Member of the Nigerian Institute of Management (NIM) and the Association of University Administrators (AUA) in the United Kingdom. She has attended several capacity-building Workshops and Conferences, locally and internationally, such as the Annual Conferences of the AUA held in Nottingham and Manchester, United Kingdom in 2011 and 2014 respectively.

In September 2018, she was appointed the Ag. Registrar, Michael Otedola College of Primary Education (MOCPED). The appointment was confirmed in September 2019 as the 5th and 1st female substantive College Registrar of the College.

Her experiences as an Administrator over the years have earned her the present position as the Ag. Registrar, Lagos State University of Education (LASUED). She has to her credit an Award of Honour in recognition of her contributions to the School of Early Childhood Care and Primary Education (SECPED), MOCPED, dated October 21, 2021.

She is married with children.