WE ARE BOUND WITH HISTORY

(a) Brief History of Adeniran Ogunsanya College of Education (AOCOED)

LASUED is situated in Lagos and it is of dual campus. It is a university coming out from the merger of two erstwhile colleges of education owned by the Lagos State Government. Even though by age and activities one is older and bigger than the other, but it will make for a more peaceful coexistence not to make one subordinate to the other. Hence, we have two campuses that retained the old names of the colleges, namely: 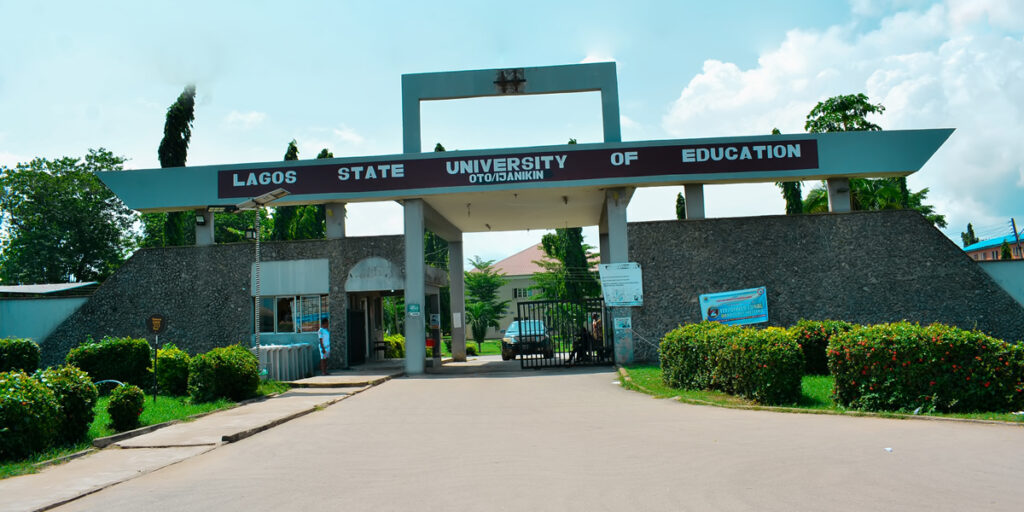 Adeniran Ogunsanya College of Education, (formerly Lagos State College of Education) Oto/Ijanikin is the offshoot of the Lagos Teacher Training College, Ebute-Elefun in Lagos Island which was established by the Federal Ministry of Education and Commissioned by Hon. Aja Nwachukwu (MON) the then Minister of Education on May 9, 1958 as a Grade II Teacher Training Institution. Consequently, the idea of establishing a centre where unqualified teachers’ professional skills could be upgraded was muted alongside the training of craftsmen who could help teach practical skills to pupils. Hence, by 1958, a Grade III Teacher Training College in the name of Lagos Day Training College, with a population of about ninety students was established. Within the first decade of its existence, it became a Government Teacher Training College and was charged with the responsibility of producing Grade II teachers. The great need for teachers in Lagos State schools caused the then Military Government of the State in 1973 to elevate the College from Government Teachers’ College for training of middle level manpower teachers for the award of the N.C.E. (Primary) certificate.  The College was then affiliated to the then College of Education of the University of Lagos, which assisted in working out the curriculum, screening of teaching staff and advising of building of laboratories for the teaching of courses in the sciences.  The Institute of Education of the University of Lagos supervised the final year teaching practice, moderated the years’ examinations, and awarded certificates to the graduates.  The first set of students completed their N.C.E. (Primary) Courses in 1976.  However, this arrangement was to last for a short while. The early 1970s saw the formulation of educational policies and propositions which positively changed the fortune of the College and have resulted in giving her opportunities to undergo significant transformation both in focus and structure over the past six decades. The transformation has since taken the College through an inward mobility from Grade III Teachers’ College to Grade II and later to one that trains teachers for the award of Nigeria Certificate in Education (NCE). This upward mobility can be attributed to the ever increasing demands for teachers, population explosion among those seeking admission into the College programmes and the corresponding increase in the high quality of human resources needed for training students in Lagos State. As more secondary schools and teacher training colleges were established in the state, the training of NCE teachers for primary schools became redundant and the State Government decided that the academic orientation of the College be changed to NCE (Secondary) in 1976/77 session. Thereafter, the first set of students for NCE (Secondary) was admitted into the College and consequently in June 1979, the NCE (Primary) was completely phased out. In 1980, the civilian administration in the state promulgated a law granting autonomy to the College, thereby enabling it to have a Governing Council and have its name changed from Advanced Teachers’ College to Lagos State College of Education (LACOED).Hence, the Lagos State College of Education was established under law No. 23 of 1980 (D14) published in the Lagos State Official Gazette No. 64 Volume 1 of 19th October, 1980.  This however has been superseded by another edict contained in Lagos State of Nigeria Official Gazette Extraordinary No. 13 Volume 19 of 11th July, 1986.  In this enabling law, the aims of the College were spelt out as: The implication of these objectives is that the College is expected to do more than just produce teachers for the school system. For the purposes just mentioned, the College since its inception in 1973 was housed in a very small area at Onitolo in the heart of Surulere, Lagos. In response to the problem of grossly inadequate land space in relation to the demands for the development of modern infrastructural facilities and increasing population of students at its Surulere site, the State Government, in 1981, moved the College to the more spacious permanent site at Oto/Ijanikin, Kilometer 30 Lagos Badagry Expressway. In 1980, a College Masterplan was approved and construction work on the site for the first phase of the new structural development commenced. The foundation stone for construction was laid on 29th July, 1986 by the then Governor of Lagos State, Group Captain Gbolahan Mudashiru. A remarkable turning point in the history of the College was when the Military Administrator of Lagos State, Colonel Mohammed Buba Marwa, officially renamed the College after late Otunba Adeniran Ogunsanya, an illustrious son of the state who contributed immensely to the provision of quality education in Lagos State. The College became known as Adeniran Ogunsanya College of Education (AOCOED), Oto/Ijanikin, Lagos State in 1996. The College currently serves as an affiliate College of the Ekiti State University, Ado Ekiti, by awarding first degrees in programmes in Education. Precisely in 1999, a Memorandum of Understanding (MOU) was signed between the College and the then Ondo State University, Ado-Ekiti, now Ekiti State University, Ado-Ekiti after an approval by the University Senate.  This MOU, which has since been reviewed and approved prescribes certain roles for both the University and the College for easy operation of the programmes. The programmes were appraised and approved by the National Universities Commission (NUC) in 2009 and the College has succeeded in running the Full Time Undergraduate programmes in Education courses in affiliation with the Ekiti State University, Ado – Ekiti for close to ten years. 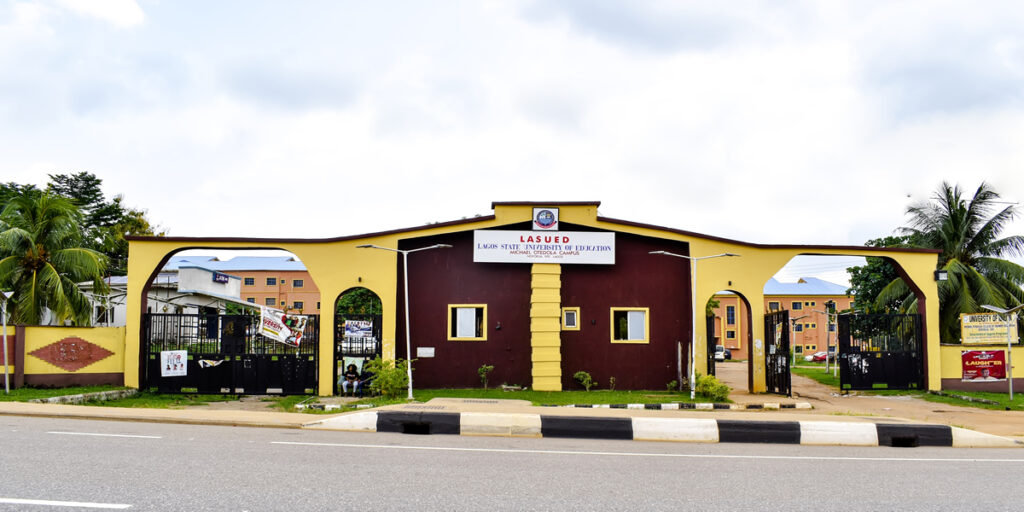 The Michael Otedola College of Primary Education (MOCPED), Noforija, Epe, was established by the Lagos State Government in December, 1994, as Lagos State College of Primary Education (LACOPED), Noforija, Epe. The establishment was pursuant to the then National Policy on Education, which inter alia, requires the National Certificate in Education (NCE) as the basic (minimum) qualification for teaching in Nigeria by the year 2000. More importantly there was need to provide functional and qualitative education predicated upon well trained and sound professional manpower to the citizenry of the state.

Generally, the Lagos State College of Primary Education was established for pre-service and in- service training and certification of graduates for all levels of Basic School system. Specifically, the College is to prepare and produce pre-service subject specialist for lower, middle and upper basic (formerly primary and junior secondary) education levels. This is in contrast to the generalist subject teachers produced by conventional Colleges of Education.

The College began formal activities on December 1, 1994 at the Government Guest House, Epe with the appointment of the first Council, Provost, and three other Principal Officers by the Provisional Governing Council. The College was renamed Michael Otedola College of Primary Education (MOCPED) in April 2007 in honour of a former governor of the state, Sir Michael Agbolade Otedola, under whose administration the institution was established. And Dr. Nosiru Olajide Onibon (Associate Professor) is the current Provost of the institution. The inaugural Provost of the College was then Dr. (later Prof.) Tunde Samuel, followed by Mr. K.O. Ekemode, Mr. W. Amisu (as College Administrator), Prof. A.O.A. Oguntoye, Dr O.O. Oshodi (in Acting Capacity), Dr. (later Prof.) Olu Akeusola, Dr. S.A. Popoola (in Acting Capacity) and Associate Prof. Nosiru Olajide Onibon, who is the incumbent Provost.

The Institution is sited in the town of Noforija in Eredo Local Council Development Area of Lagos State (carved out of Epe Local Government Area) Noforija is about 7 kilometers north of Epe town and 28 kilometers south of Ijebu Ode town in neighbouring Ogun State. The College is along a major interstate link road called Epe – Ijebu ode Expressway which is a direct route to most of the southwestern states (Ogun, Oyo, Osun, Ondo and Ekiti States) as well as Edo, Delta and Kwara States in the South – South and North Central geopolitical zones. This location and links put the College in a vantage position to access candidates and people in at least three (3) major geopolitical zones of South West, South – South and North Central parts of the country.

The institution began its academic programmes in May, 1995 with  eighty-two (82) pioneering students in three PRE-NCE programmes and less than 100 academic and non-academic staff. However, regular academic activities for the NCE programmes began in November 1995 with one hundred and eighty-two (182) students, after extensive consultation with the relevant regulatory body – National Commission for Colleges of Education (NCCE). The College activities are being consistently guided by the enabling (edict) law, conditions of service for Junior and Senior Staff and the College Master Plan, among other statutory documents which subsequently came into operations. As at the year 2020, total student enrolment in the College programmes is about 4,000, which are drawn from across the various states in Nigeria. Presently, the College runs National Certificate in Education programme and is in affiliation with Universities of Ibadan and Ekiti State University for Degree programmes in Education. The College graduated its first set of NCE graduates in 1998 and since then till December, 2019, it has produced over 25, 000 alumni in both the regular, part-time and affiliate programmes, many of whom occupy important positions in the public and the private sectors of the nation.

Currently, the College occupies a land area of eighty eight (88) hectares and has six (6) Schools, and twenty-three (23) Academic Departments. It also has over seven Directorates, a School of Remedial Studies, an International Secondary School, a Primary School, and Consultancy outfits that provide a variety of services. It has a total staff population of 438 with academic staff constituting about 150.

Since the College’s inception 27 years ago, it has, maximized every opportunity afforded by the State government and other stakeholders to meet necessary developmental needs in the realization of its trifocal functions of production of high-quality graduates, research and community service. Therefore, it is not surprising that from a modest beginning 27 years ago, MOCPED has been transformed into a primus inter pares in the committee of Colleges of Education in Nigeria.